“Adorno viewed disenchantment not so much as a process but an ideology, a class-anchored  form of thought that heralded the struggles of the bourgeois revolution. As such it is not inescapable, but must be understood to be combated.”

Last Wednesday on the 28th of March I attended at WORK Gallery, who is currently hosting an exhibition of her work, a discussion between Suzanne Treister and Adrian Danatt. Suzanne Treister I have already presented in a previous post, and Danatt, whom I never had the chance to hear about before, is apparently a prominent art critic known, according to Wikipedia, for gifting dead birds to his hosts.
No such antics this time but a discussion which, if sometimes hazy, gave us the opportunity to confirm a certain number of assumptions concerning Treister's new project as well as debunking a few others.

Black Dog treated me to a a beer, a book and a tarot set for review purposes, which I will further discuss later (not the beer). The exhibition itself  presents on one hand preliminary adventures of Rosalind Brodsky in video form -several hours of free association forming a continuous story-line over the years- while the rest comes as an addition to the Science Museum exhibition and echoes an element of 2039, with a bibliography of Treister's researches, presented in the form of extremely detailed mirrored pencil drawings of the book covers.

We heard during the panel discussion, that the mirroring was an artifice aimed at implicating the audience with the work, requiring more involvement from the spectator to actually decipher the artwork, a recurrent theme in the Hexen series. Yet most of the discussion seemed to focus less on the particular form implied by the multimedia and modular approach of the artist, than on the difference between hidden and occult, and more interestingly, on the difference, between 2.0 and 203. 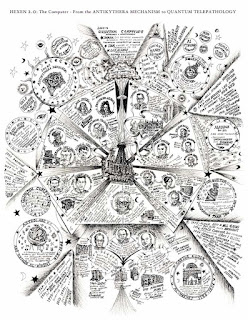 Hexen 2.0 : HISTORICAL DIAGRAMS: The Computer - From the
ANTIKYTHERA MECHANISM to QUANTUM TELEPATHOLOGY

Hypnerotomachia Poliphili, the Mutus Liber and maybe Campanella’s City of the Sun are only a few examples of the rich esoteric litterature that florished from the middle age to the end of the 18th century and gained mainstream recognition as works of art: all of those books in their intrinsequely symbolic nature have acquired a particular status in artistic and litterary history, not only for being the backdrop onto which an endless succession of ideologies has been projected, but also for being in their mystery, a unique form of work coupling enough structure to hint clearly at a meaning and too few clues for any answers to be definitive. 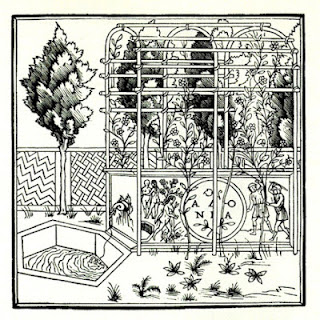 Art itself is often open to those interpretations – we create our own meaning, we decrypt or project ideologies and intentions onto artefacts that remain ultimately unknown, often even to the artist – it comes as no surprise that “secret history” that particular discipline in conspiraciology looking at history to divine in it a secret meaning or an underlying organisation, is so fond of art: from the arcadian sheperds to the Chartres cathedral, we are faced with signifiers whose original meaning has been lost but whose power lies in the multitude of interpretations it recieved, in a word, it's history.

What Danatt seemed unwilling to admit is that when dealing with “fringe culture” be it in the form of conspiracy theory or pseudo-science (as discussed in a recent Margaret Wertheim's awesome article for New York Review of Books), we deal with a mass of information that are sometimes individually verifiable but whose agencement, whose structure, is fictional. Conspiracy is essentially a matter of connecting the dots. 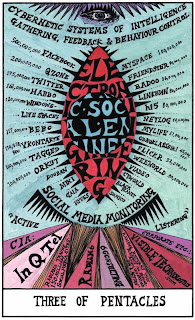 Like those children games that reveal, as we trace the lines between the numbers, a figure or a character, when looking at history we are faced with a choice: we can either docilely follow the numbers to find the figure that we were meant to find, or we can refuse the given order of things and try to decrypt new forms, new patterns. 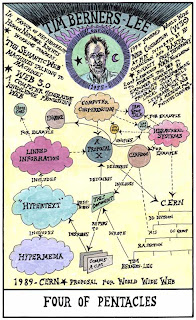 This is a game (games seems a recurrent theme in Treister’s older work) – and it's fragmentary presentation encourage the visitor to participate himself in this exercise of world building, ushering the audience in the alternate consensus of the project, in order not only to trigger an emotional response towards the artwork, but also an intellectual response towards the content.

Treister insisted repeatedly during the conversation that Hexen 2.0 contains no elements of fiction - I have my reserves on this, but I guess one can blame the séance "vidéo" at the Science Museum on form rather than content, like the alchemical references or the format of the tarot : it is easy to believe her, anyone who has researched towards historical fiction for long enough ends up experiencing the eerie Belbo syndrome and finding that history, and reality itself, writes a plot better than one could ever come up with. 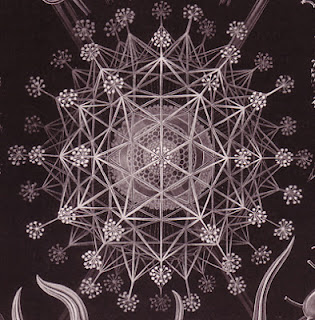 Ernst Haeckel, detail from Phaeodaria, from Art Forms in Nature

As Umberto Eco depicted, there is a point where the new facts your researches provide seem to fit chillingly well with the pieces of the puzzle you have selected before and brings you in front of the choice between believing your own creation or denigrating it as pure fiction. So Treister decided to let her research roam free, obliterating the formally narrative aspects and the fiction it required, to leave only actual facts, presented in a modular fashion and leaving for the audience the job to build the missing narrative, possibly through their own involvement with the entities, movements or characters described, or at least with their many proxies in our daily lives.
Posted by Bertrand
Email ThisBlogThis!Share to TwitterShare to FacebookShare to Pinterest
Labels: Art, Conspiracy, Contemporary, Frank E. Dec, Hexen, Immersive, Multimedia, Myth, Occult, Science, Suzanne Treister