The Hexen series is such a dense work – in terms of it’s concept and it’s content – that in order not to bore you or me to death, I will have to take radical decisions onto what deserves my attention and what does not. 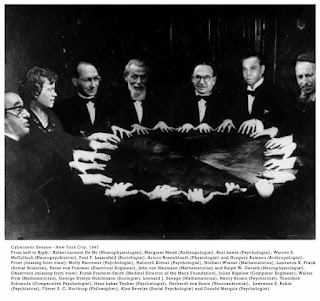 In 2007 a first exhibition entitled Hexen 2039 introduced me to Rosalind Brodsky, the fictional alter ego of the artist Suzanne Treister, a delusional art teacher supposedly time travelling to research, in that first project,  sound based technology developped by the american military to enforce mind control. The work itself took the form of a collection of drawings, films and installations, describing in detail a conspiracy spanning over decades and covering with dazzling cohesion, military secrets, psychich phenomena, counter-culture mythology, pop cimematography and the occulture in it’s more historical expression. 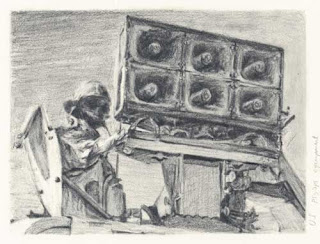 The result was a body of visual work that acted as a mere anchor point for what the art-work really was about, that is a theory, an interpretation of accepted historical facts assembled together as to hint towards a secret, occulted order of things. 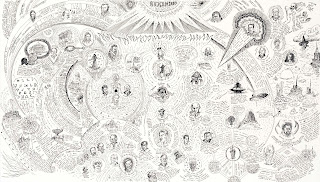 This approach was asking some very interesting questions, first, in the way the visual (or more generally physical) act as a representation of the conceptual content of an art-work, but also crystallizing the nebula of questions anyone interested in conspiracy theory or historical fiction is bound to ask: what separates history from fiction?

Hexen 2.0 in terms of media, takes a form relatively similar to it’s precursor, that is a series of graphic works, including diagrams, ink prints and tarot cards, as well as a film and, apparently nowhere to be found at the science museum, pencil renditions of the project’s rich bibliography.

In it’s content, though, it is rather different: the mood, first of all, is a lot more serious – many facets of the 2039 installment were blown out of proportion, leaving both a near humorous after taste and a sense that the art works could be read as a form of psychotherapy addressing the relationship between for exemple paranoia and creativity. Here everything is a lot more credible, and the elements of pure fiction, if there are any, are much more difficult to identify. 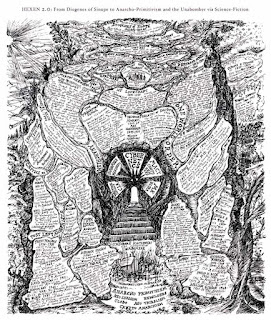 Hexen 2.0: HISTORICAL DIAGRAMS: From Diogenes of Sinope to
Anarcho-Primitivism and the Unabomber via Science-Fiction

Whereas in the first project Treister looked at delusion to provide the other-worldly in her work, here she obviously look at the liminal and the extreme, from primitivism to system theory. And as a matter of fact, science in it’s more speculative and theoretical form connects necessarily with ideology, granting ideas the aura and the power to pose as the boogeyman central to any conspiracy theory. 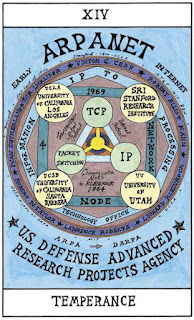 She then takes us on a roller-coaster of utopianism, neoluddism, psychedelics, secret governmental projects, system theory, emergence, the internet and all that virtuality has promised for the years to come. This is all very interesting, the filliation in her history of ideas is presented via the large scale diagrams, sort of Mutus Liber inspired spidergrams (a lot more interesting graphically than the first series), while her portrait gallery present the founding father of cybernetics , the secret chiefs of her theory, and the tarot itself bring a more in depth examination of the cloud of inter-related elements of her narrative. 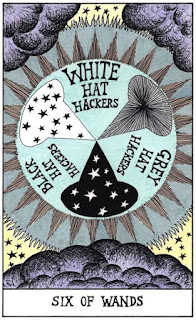 But what really strikes a chord, the format aside, is that pretty much every fragment of her narrative echoes an interest of mine: Hexen 2039 went from Austin Osman Spare to brown noise and 2.0 starts with ternary computers to Zerzan. Although this unapologetic omnipresence of counter-culture first seems gratifying, with a bit of distance it seems to be asking what is our true relationship to fiction, history and that grey area that lay in between.

The entirety of the artwork can be perceived on two different levels : one I would call fictional, where the artifacts are understood to be artworks, relating to each other and telling a story about people and their interactions, with all the symbolic meanings this entails, and one I would call meta-narrative, if you can forgive the pretentious jargonization. In this meta-narrative we take the art work not as a fiction but as a documentation of a real world conspiracy. 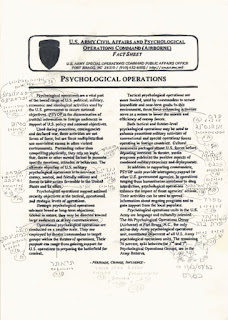 In the first project Hexen 2039, the entirety of the artistic production could be interpreted as, obviously, an artwork, or as the documentation of a historical phenomenon, if the conspiracy described was to be taken seriously. This ambivalence seems to have largely disappeared from the second occurence, where Rosalind Brodsky (who provided the meta-narrative uniting the fictious and the real) is nowhere to be found. Also, the tarot itself seems to be a slightly indulgent form of narrative exposition as at the time (I am still to buy the book) it does not seems to tie in with the meta-narrative.

This ambiguous position between fact and fiction made Hexen 2039 a truly immersive piece of work: further research from the visitor could seamlessly continue the artwork into the rich body of conspiracy theories it could be connected with, and definitely Hexen 2.0 begs to be approached in the same way, which is a fascinating feat in itself and can provide anyone with months of coherent narrative. Yet on my way to the Science Museum I was hoping that Treister would have come up with new ways to blur the frontier between her work and the real world – Surely I should be glad else I would have to start wrapping my scalp in tinfoil.
Posted by Bertrand
Email ThisBlogThis!Share to TwitterShare to FacebookShare to Pinterest
Labels: Art, Conspiracy, Contemporary, Hexen, Immersive, Multimedia, Myth, Occult, Science, Suzanne Treister